A Day in the Life of: Sound Advice

Operating from his base in Sheperton, London, Phil explains:

“After being a BT engineer for quite a few years, I discovered the world of custom install around 94/95 when my sister bought a house in Cobham which had been wired for one of the early Systemline platforms. I realised I had many of the skills needed to make a go of the industry and things just took of from there”. 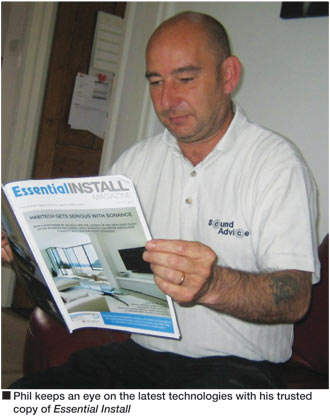 “I started working for a company called Sound Simplicity and when that ended in 95/96, I set up on my own and Sound Advice was born. I started out fitting Systemline products in and around Cobham and Weybridge and picked up quite a bit of work just driving around and introducing myself when I saw a new build or renovation taking place.”

Phil adds: “In the early years, I also got involved with installing Opus systems, even to the point where I was subcontracting out to them and working on some of their high profile new builds with developers such as St George.“

My own company took a bit of back seat whilst I was working with Opus and when the structures changed of who could be an Opus dealer, which didn’t really fit my business model, I took the opportunity to refocus on Sound Advice.

Things have been going really well over the last three years as I have been involved with some the biggest projects in my career. However, I am not getting any younger and don’t necessarily want to be crawling around in loft spaces for ever, so I am now looking to expand the company a little and looking around potentially for someone to come and work with me or maybe subcontract some of the work.”

Phil explains that one of the sources of the increase in the amount of work has come from a surprising resource.

“I got a new website around 18 months ago, nothing that flash, it’s just a one page site that explains simply who I am and what I do, with links to a Facebook page where I post photos of the work. It seems to connect well with people as increasingly customers who phone up say they got my name from the website when searching for an AV expert. I think I must have had five really good projects from the website already this year. I think keeping it simple and not blinding people with too much science, works well and implies that the process will be straightforward.”

Phil adds: “I also think that keeping an open mind on the type of work that the company does helps. I am happy doing large scale residential stuff and commercial projects, but I am also happy hanging a large plasma for a client with some simple AV stuff, you never know where things will lead.”

In terms of the type of work coming through, Phil says:“The dedicated cinema seems to be hot at the moment. I have done five already this year. I think part of the reason is that the kit has really improved in recent years. I am using the Panasonic PT-AE3000 a lot at the moment as the performance is stunning, but I also like the JVC range and in particular the electronic adjustment and set up on the JVC’s makes life a lot easier.”

Phil adds: “I am still a fan of the Systemline platform, it all works well and is an easy system to install. In fact I am in the middle of doing a quote for a Systemline install at the moment in Henfield over in West Sussex, a really nice area that I think could produce some good business in the coming years.”

However not all products Phil favours have improved for the CI: “I used to install Apple TV quite a bit as it provided a really good service at a good price point. However, I am not such a big fan anymore since they got rid of the hard drive. It means the user has to have their laptop open and makes the whole process a little unwieldy. I guess for Apple it was a cost thing, but we still try and find the older ones with the hard drive.”

Phil also likes to keep things fresh with the product he uses: “I always like to keep searching for new products that really fit exactly what the client wants, rather than relying on a few regulars. However, one gripe I have is some manufacturers make it far to hard to buy their kit, making life difficult if the piece I want is not covered by one of the CI distributors. I understand that they have rules about who and who can’t have a trade account, usually based on the amount of business coming from a given company, but it cannot be beyond them to set up some kind of system that would allows companies like mine to buy kit as and when I needed it. A sale is still a sale after all!

“It also annoys me when kit is billed as ring fenced only for the CI industry and then turns up on the Internet. Another issue that can be a little upsetting is that the differing level of discount offered to different CI companies (usually based on the amount purchased) again this tends to penalise the smaller operator.”

Phil argues: “Ultimately I try and keep things straight forward and give the client exactly what they want and no more. I think the CI industry sometimes has a tendency to over specify, which does no good in the long run as if the client ends up not using half the equipment or functionality, they won’t feel they have got value for money and won’t be back for more or tell their friends.”

Phil argues: “I think Smart TV provision and up-grades could be a big driver for the industry enabling CIs to get through the door and build projects from there. Obviously broadband speeds can be an issue, but I can see the adoption of more and more streaming platforms being a major feature of the AV world in the coming years as well. Increasingly content will move on-line and to cloud platforms and providing solid networks for homes will become a major part of the CI’s work. The other big area of course is HDMI distribution and we tend to cable for HDMI distribution for every job we do now.”

Heading off to finish his quote for the Henfield job, Phil predicts: “I think the CI industry will always be there. Technology is changing so fast all the time, that there will always be people who want assistance in making sense of it all. Personally I am looking forward to seeing how things develop and how we can continue to offer a real wow factor to clients.”

You can find out more about which cookies we are using or switch them off in settings.

This website uses cookies so that we can provide you with the best user experience possible. Cookie information is stored in your browser and performs functions such as recognising you when you return to our website and helping our team to understand which sections of the website you find most interesting and useful.

Strictly Necessary Cookie should be enabled at all times so that we can save your preferences for cookie settings.

If you disable this cookie, we will not be able to save your preferences. This means that every time you visit this website you will need to enable or disable cookies again.